In order to run the Visualizations.ipynb, Graphviz executable must be on the jupyter path. To installed on Mac OS X, use the following brew formula:

Here I will consider the rubric points individually and describe how I addressed each point in my implementation.

1. Submission includes all required files and can be used to run the simulator in autonomous mode

My project includes the following files:

2. Submission includes functional code Using the Udacity provided simulator and my drive.py file; the car can be driven autonomously around the track by executing

3. Submission code is usable and readable

1. An appropriate model architecture has been employed

A model summary is as follows:

(More details about this bellow.)

2. Attempts to reduce overfitting in the model

I decided not to modify the model by applying regularization techniques like Dropout or Max pooling. Instead, I decided to keep the training epochs low: only three epochs. In addition to that, I split my sample data into training and validation data. Using 80% as training and 20% as validation. This can be seen at this part of the code.

The model used an Adam optimizer, so the learning rate was not tuned manually (model.py line 146).

Training data was chosen to keep the vehicle driving on the road. Also, the data provided by Udacity, I used the first track and second track data. The simulator provides three different images: center, left and right cameras. Each image was used to train the model.

For details about how I created the training data, see the next section.

My first step was to try the LeNet](http://yann.lecun.com/exdb/lenet/) model with three epochs and the training data provided by Udacity. On the first track, the car went straight to the lake. I needed to do some pre-processing. A new Lambda layer was introduced to normalize the input images to zero means. This step allows the car to move a bit further, but it didn’t get to the first turn. Another Cropping layer was introduced, and the first turn was almost there, but not quite.

The second step was to use a more powerfull model: nVidia Autonomous Car Group The only modification was to add a new layer at the end to have a single output as it was required. This time the car did its first complete track, but there was a place in the track where it passes over the “dashed” line. More data was needed. Augmented the data by adding the same image flipped with a negative angle(lines 85 - 87). In addition to that, the left and right camera images where introduced with a correction factor on the angle to help the car go back to the lane(lines 50 - 63). After this process, the car continues to have the same problem with the same “dashed” line. I needed more data, but it was a good beginning.

The final model architecture is shown in the following image: 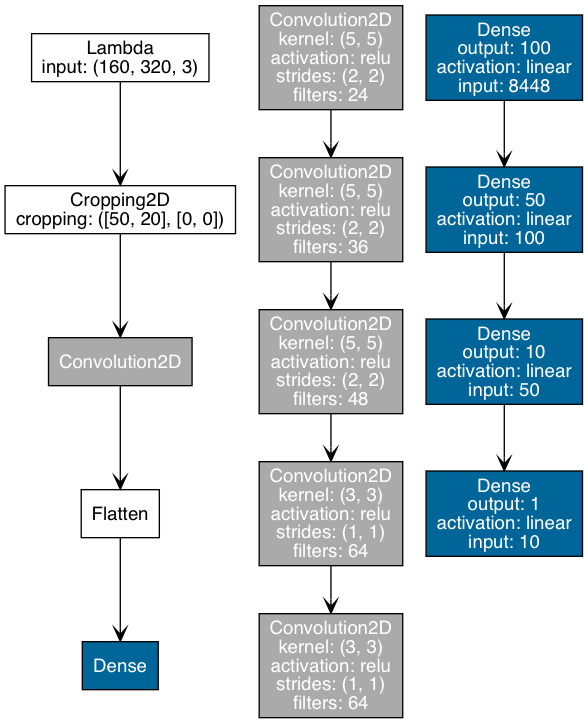 To have more data, the following tracks were capture:

All these data was used for training the model with three epochs. The data was shuffled randomly. The following picture shows the training:

After this training, the car was driving down the road all the time on the first and second track.