This repo contains the second project on Udacity Self-Driving Car Nanodegree Term 1. The project consist on training a Convolutional Neural Network to recognize traffic signs. The project definition could be found here

Unzip the file ./data/train.p.zip to the ./data. This file contains the traffic signs for training, and it is too big to have it in github without compression.

The main code is Traffic Classifier Simplified.ipynb. There are other important directories:

There is another notebook I used to play with preprocessing images and networks Experiments Traffic Sign Classifier.ipynb

The project implementation can be found Traffic Classifier Simplified.ipynb. It consists in five steps.

In this steps, the provided data is loaded using the pickle library. The images have labels to recognize what they represent. The labels are numbers, but there is a .csv file containing the mapping between the labels and a text name of the image to make it more human-friendly.

Here the data set is explored. First, show some general numbers about it:

We have 43 different traffic signs. Some random images are shown: 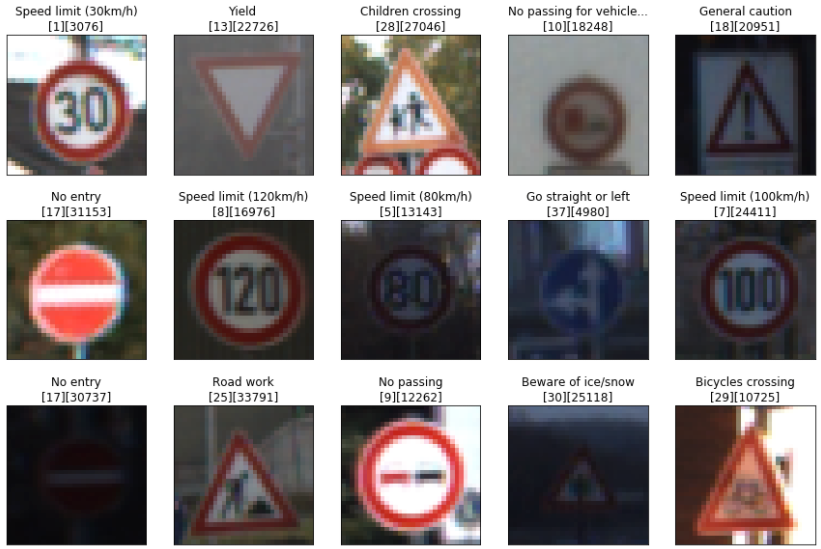 and the distribution of the labels is presented:

The distribution has too many images on the first labels. I needed to have more images to train out model. The process is called data augmentation. New images are created from the training data by transforming images with small distribution. The transformation used were arbitrary scaling [1.0 - 1.3], random translation [-3, 3] pixels in both axes, and random rotation [-90, 90] degrees.

After both new and original images are together, the train data has a more even distribution:

Neural networks work better if the input(feature) distributions have mean zero. A suggested way to have that normalization was to operate on each pixel by applying: (pixel - 128)/128. There are a lot of different preprocessing we could do to improve the image qualities (I did some testing here), but I decided to go just for gray scaling the images. 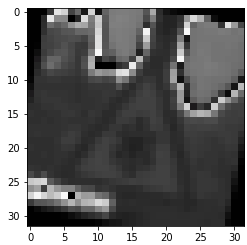 The starting model was LeNet provided by Udacity. This model was proved to work well in the recognition hand and print written character. It could be a good fit for the traffic sign classification. After modifying the standard model work with color pictures, I could not have more than 90% accuracy with my current dataset and 15 epochs. To improve that, start making the first two convolution layer deeper, and then increase the size of the fully-connected layers as well. With these modifications, I got just above 90% accuracy. To go further, I added two dropout layers with 0.7 keep probability and increased the training epochs to 40. The final model is described as follows:

The introduction of dropout help to stabilize the training process.

Train, Validate and Test the Model

I started training with 15 epochs, and they increased it to 40. Using 128 as batch size (I didn’t play with this parameter), learning rate 0.001 and use Adam optimizer not needing to change the learning rate. Here is my network accuracy by epoch: 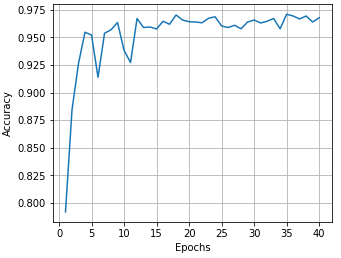 The final model have:

In this step, five new images found on the Web are classified. First, the images are loaded and presented:

The only image that should be complicated for the neural network to identify is road_work.jpg because it is a vertical flip of the road work images used on training. I didn’t know that, but it could be interesting to see how it works on it.

The same pre-processing is applied to them:

And then they are fed to the neural network. I was curious about the output value distribution:

Four out of the five images were classified correctly. That make the network 80% accurate on this images:

Here are the top five softmax probabilities for them and their name values:

This was an optional step, but it is interesting to see the features each layer is focused on.