Here I will consider the rubric points individually and describe how I addressed each point in my implementation.

1. Provide a Writeup / README that includes all the rubric points and how you addressed each one. You can submit your writeup as markdown or pdf. Here is a template writeup for this project you can use as a guide and a starting point.

You’re reading it! The project code could be found on the Vehicle Detection notebook.

1. Explain how (and identify where in your code) you extracted HOG features from the training images.

The training images are loaded at In [2]:

Here is an example of those images:

The feature extraction code (spatial, color and HOG) is at In [4]. This cell contains a set of functions provided by Udacity’s lectures to extract the features from an image. The function extract_features combine the other function and use the class FeatureParameters to hold all the parameters in a single place.

Next image shows an example for HOG for a vehicle and non-vehicle calculated at In [19]: 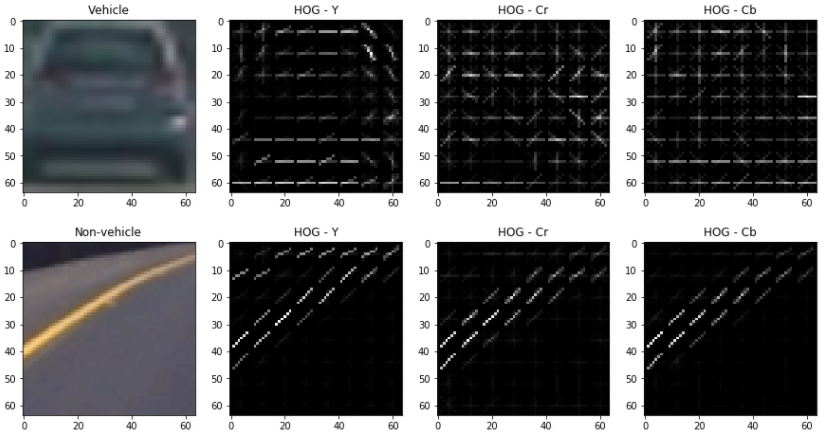 2. Explain how you settled on your final choice of HOG parameters.

The parameters were found by manually changing them and experimenting to try to maximize the model accuracy and minimize the fitting time. The final parameters are the following:

With this parameters, the classifier accuracy was 99.41 % and it took 2.97 seconds to train.

1. Describe how (and identify where in your code) you implemented a sliding window search. How did you decide what scales to search and how much to overlap windows?

My first approach to implement sliding windows was to calculate all the windows and then apply the feature extraction to each one of them to find the one containing a car. It is implemented on In [8]. Cells In [9] and In [10] contains the code for loading the test images, applying the classifier to the images and drawing boxes. The scales and overlap parameter where found by experimenting on them until a successful result was found. The following image shows the results of this experimentation on the test images: 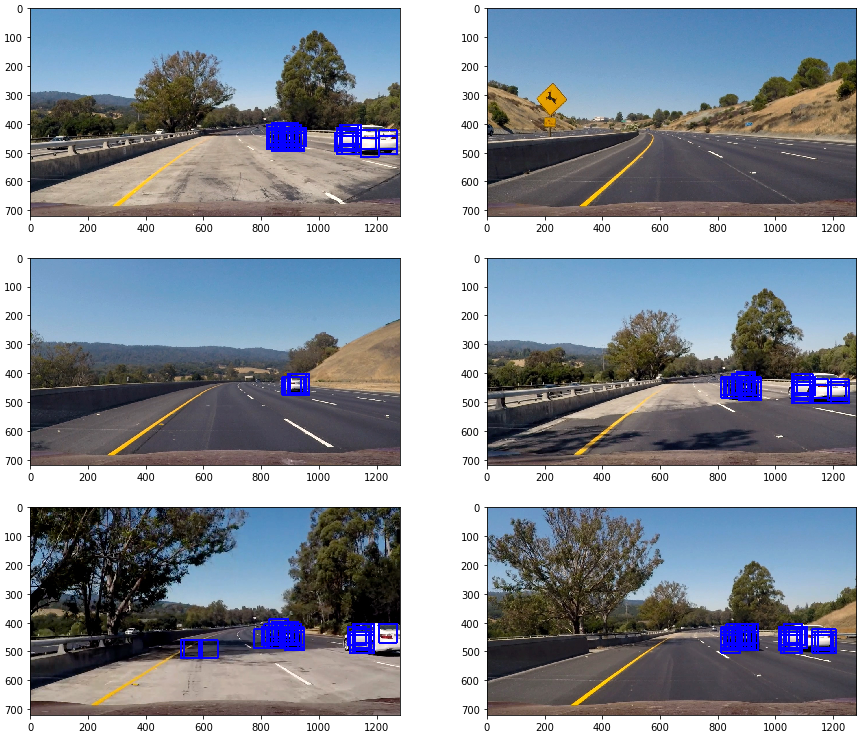 To combine the boxes found there and eliminate some false positives, a heat map as implemented with a threshold and the function label() from scipy.ndimage.measurements was used to find where the cars we. The code for this implementation could be found on In [13], and the next image shows the results on the test images: 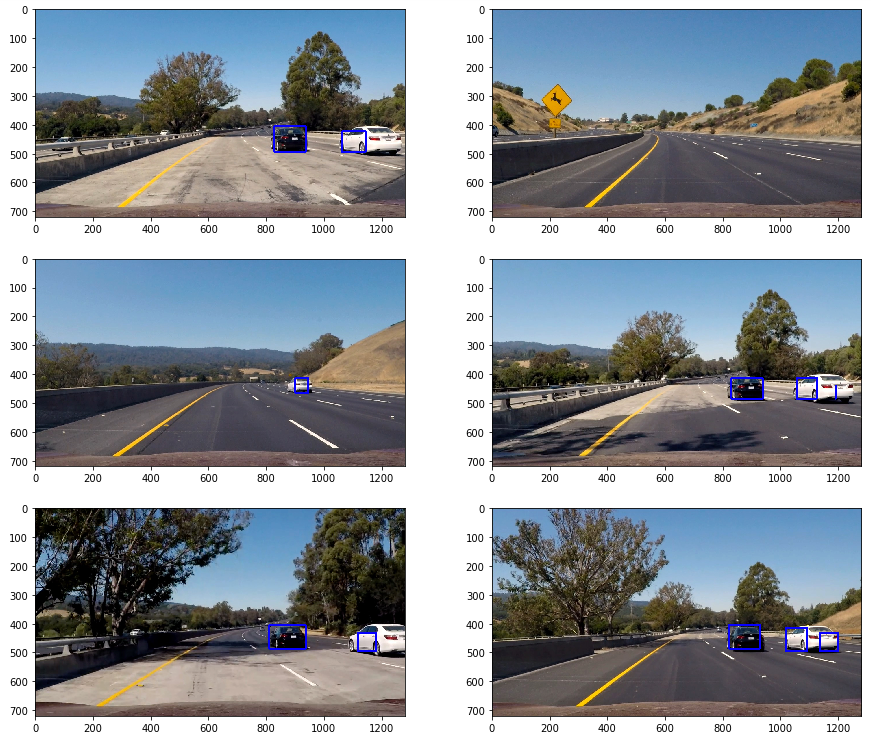 2. Show some examples of test images to demonstrate how your pipeline is working. What did you do to optimize the performance of your classifier?

The performance of the method calculating HOG on each particular window was slow. To improve the processing performance, a HOG sub-sampling was implemented as suggested on Udacity’s lectures. The implementation of this method could be found on In [14]. The following image shows the results applied to the test images (the same heatmap and threshold procedure was applied as well on In [15]): 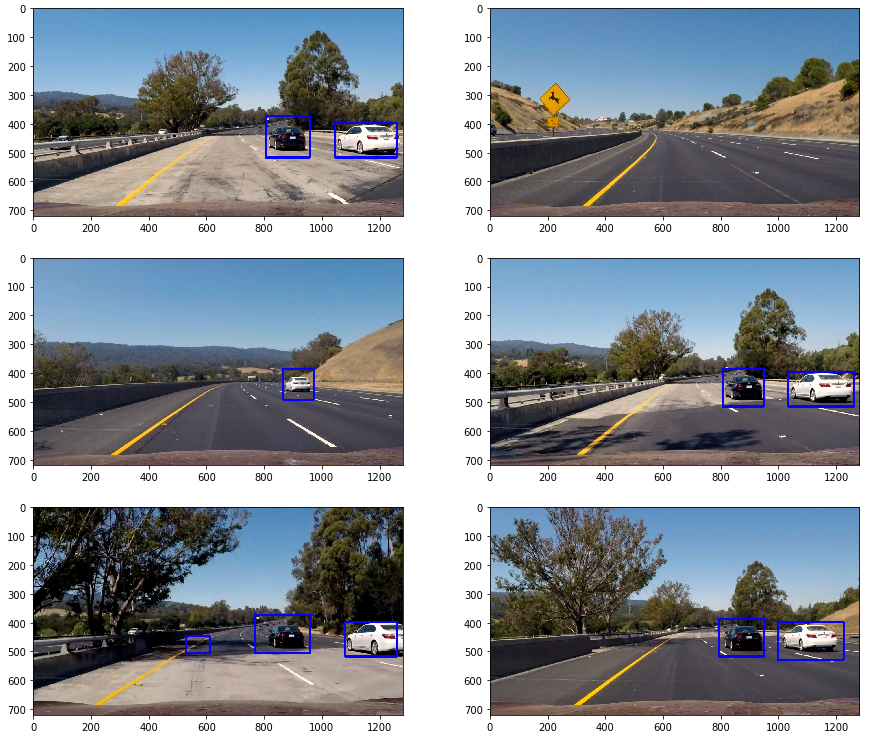 1. Provide a link to your final video output. Your pipeline should perform reasonably well on the entire project video (somewhat wobbly or unstable bounding boxes are ok as long as you are identifying the vehicles most of the time with minimal false positives.)

The video output could be found project_video.mp4

2. Describe how (and identify where in your code) you implemented some filter for false positives and some method for combining overlapping bounding boxes.

Some effort was done already to minimize false positives using a heatmap and threshold in the pipeline, but it was not enough. The overlapping bounding boxes were resolved by using the function label() from scipy.ndimage.measurements to find the cars. To filter false positives, the image heatmap map was averaged over three consecutive frames. The implementation could be found on In [25]

1. Briefly discuss any problems / issues you faced in your implementation of this project. Where will your pipeline likely fail? What could you do to make it more robust?