In this project, you get to implement and tune a cascade PID controller for drone trajectory tracking. The theory behind the controller design using feed-forward strategy is explained in details on our instructor, Angela P. Schoellig, on her paper Feed-Forward Parameter Identification for Precise Periodic Quadrocopter Motions. The following diagram could be found on that paper describing the cascaded control loops of the trajectory-following controller:

There two parts for this project where the controller needs to be implemented with python on the first one, and with c++ in the second one.

Based on the first project on the FCND. We need to control a simulated drone using python to fly in a square trajectory in a backyard. The controller needs to be implemented on the controller.py class. Udacity provides a seed project all the code you need to be able to focus only on the controller, but changes on that code is welcome as well. Udacity’s FCND Simulator could be downloaded here. The python code use Udacidrone API to communicate with the simulator. This API use MAVLink protocol.

To run this project, you need to have the following software installed:

Change directory to where you clone this repo and move to the /python directory. Let’s call that directory REPO_PYTHON_PATH. Create the conda environment for this project: 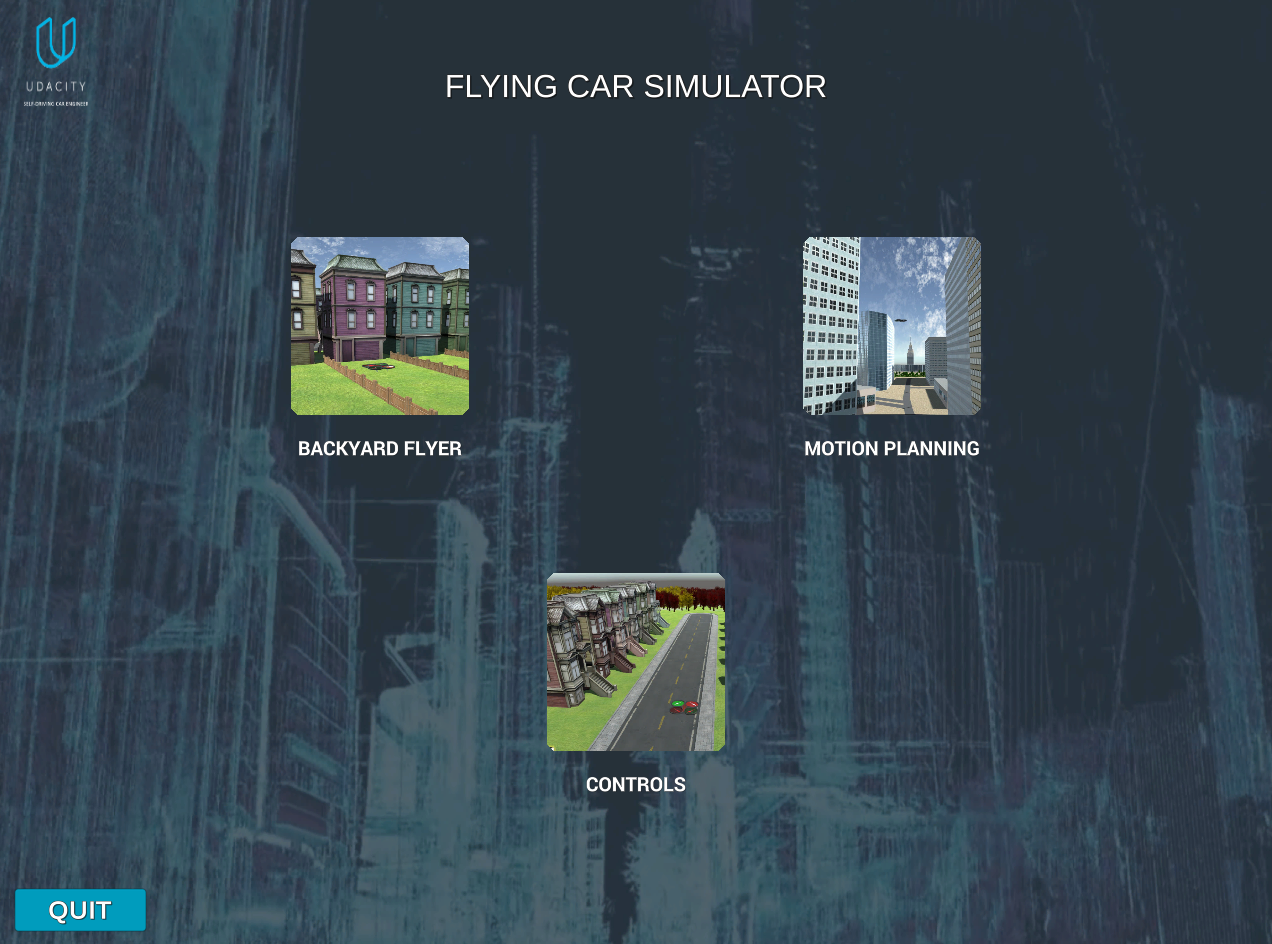 Click on CONTROLS item, and you will see the drone on the ground: 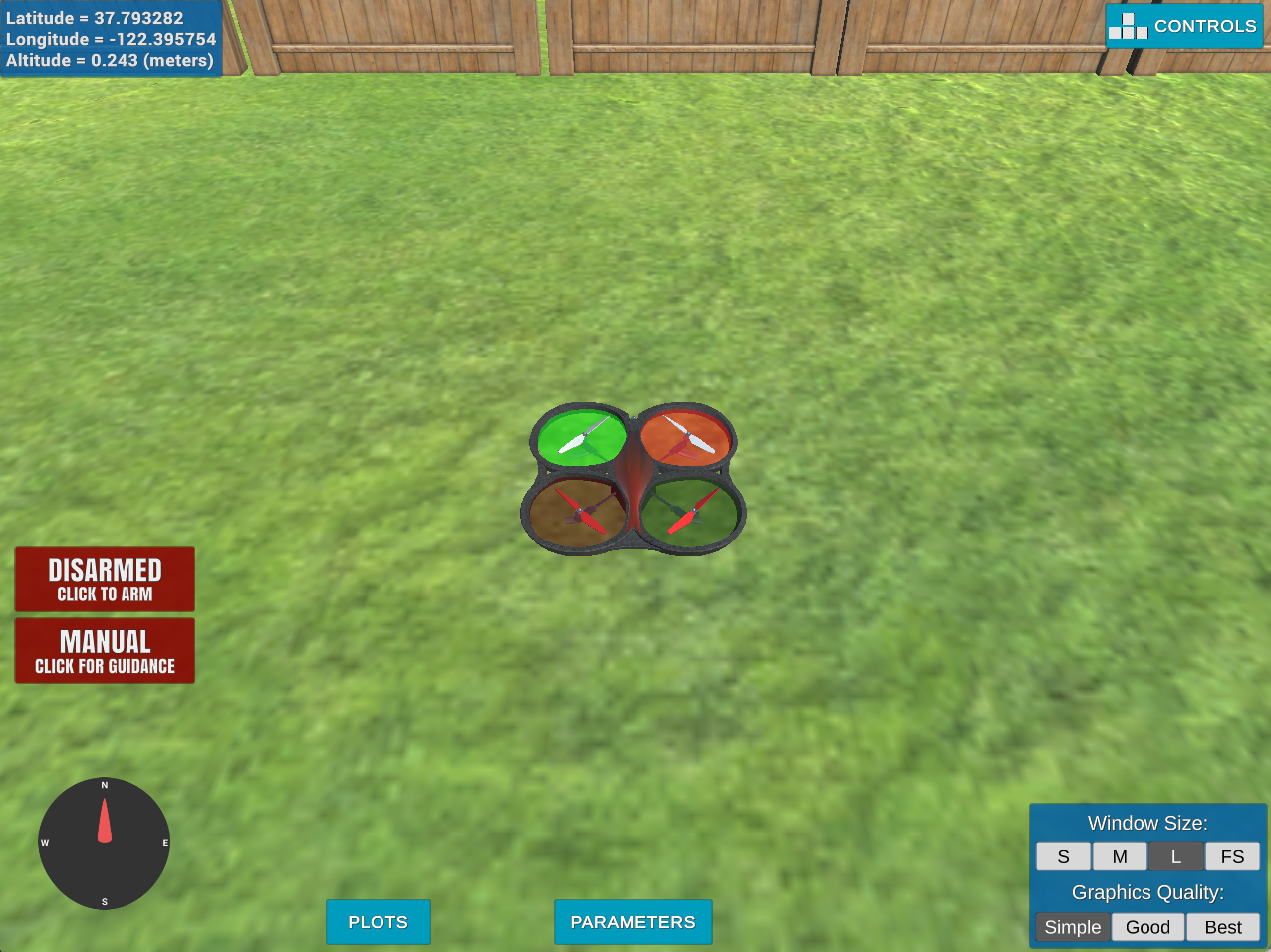 At this point, the simulator is waiting for connections ready to fly the drone. Time to run the controller.

The drone will follow the trajectory specified by the file test_trajectory.txt. The video of the drone could be found here:

At the end of the execution, the code evaluates the performance based on the project acceptance criteria. You should see something similar to this:

The telemetry file for this particular execution is this file. To tune the controller is very hard on this trajectory. In the beginning, you don’t know what to expect. The trajectory looks something like this: 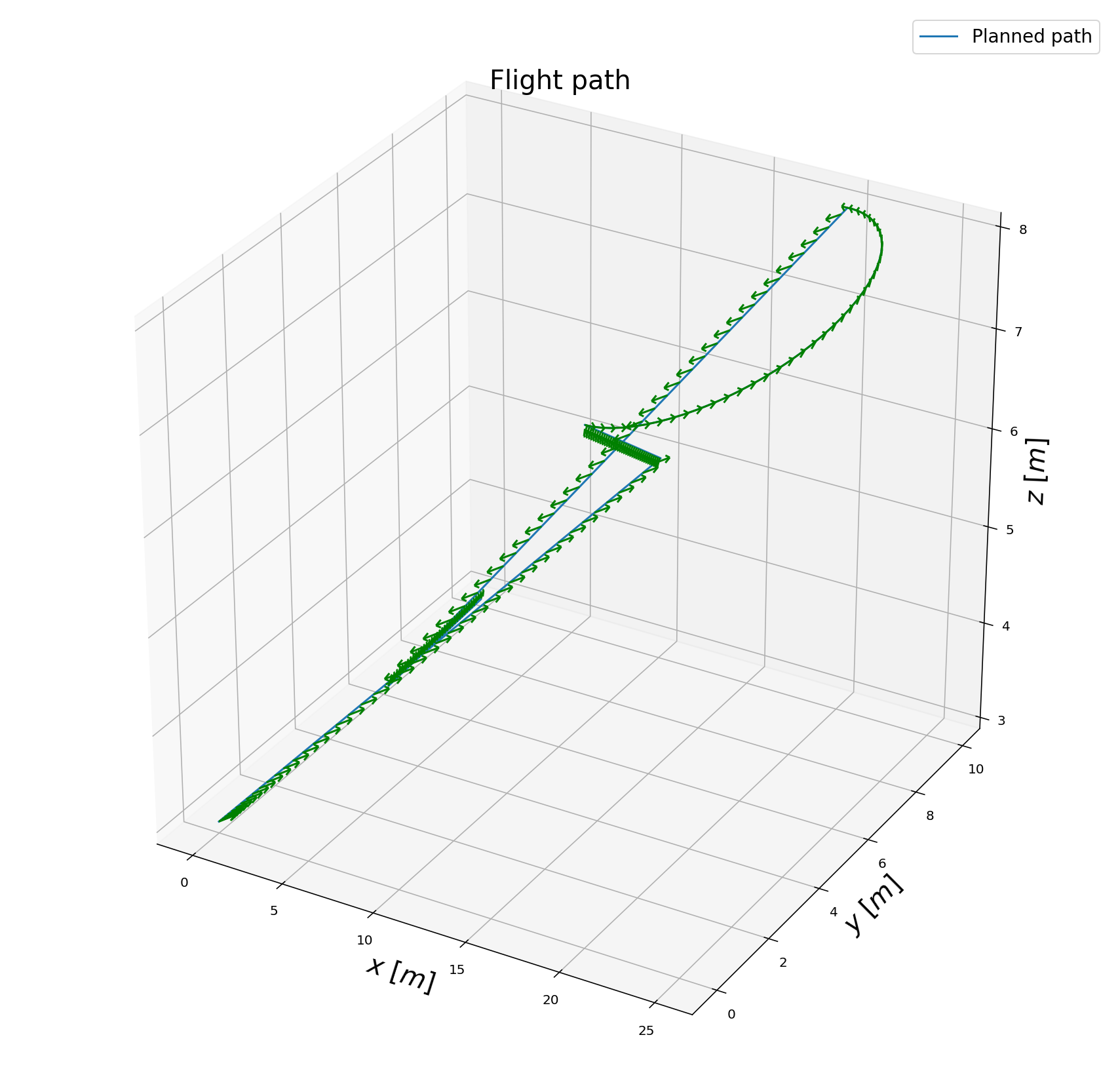 In order to check the implementation and do some tuning of the parameters before testing them on the real trajectory, I generated the following trajectories:

To load one of this trajectories instead of test_trajectory.txt, uncomment line 210 on controls_flyer.py and set the desired trajectory file there. The generation of the trajectories was done by Test Trajectory Jupyter Notebook.

This is the more complicated part of the project. If the parameter tuning on the python part was hard, this part is ten times harder. The C++ part is just a detail on this onerous task. In this case, the simulator is enforced more real limits to the implementation, and things can go wrong when some of those limits are not implemented correctly. More interesting than that is when things are not entirely wrong, just a bit. Udacity also provides a seed project with the simulator implementation and placeholders for the controller code. The seed project README.md give guides to run the project and information of the task we need to execute for implementing the controller. There are five scenarios we need to cover. The simulator runs in a loop on the current scenario and show on the standard output an indication the scenario pass or not.

All the C++ code is in the /cpp directory. The more interesting files are:

Nothing extra needs to install but the IDE is necessary to compile the code. In my case XCode because I am using a Macbook. Please, follow the instructions on the seed project README.md.

Following the instruction on the seed project, load the project on the IDE. Remember the code is on /cpp.

In this scenario, we adjust the mass of the drone in /cpp/config/QuadControlParams.txt until it hovers for a bit:

Now is time to start coding. The GenerateMotorCommands method needs to be coded resolving this equations:

Where all the F_1 to F_4 are the motor’s thrust, tao(x,y,z) are the moments on each direction, F_t is the total thrust, kappa is the drag/thrust ratio and l is the drone arm length over square root of two. These equations come from the classroom lectures. There are a couple of things to consider. For example, on NED coordinates the z axis is inverted that is why the moment on z was inverted here. Another observation while implementing this is that F_3 and F_4 are switched, e.g. F_3 in the lectures is F_4 on the simulator and the same for F_4.

The second step is to implement the BodyRateControl method applying a P controller and the moments of inertia. At this point, the kpPQR parameter has to be tuned to stop the drone from flipping, but first, some thrust needs to be commanded in the altitude control because we don’t have thrust commanded on the GenerateMotorCommands anymore. A good value is thurst = mass * CONST_GRAVITY.

But the problem is you need to output roll and pitch rates; so, there is another equation to apply:

It is important to notice you received thrust and thrust it need to be inverted and converted to acceleration before applying the equations. After the implementation is done, start tuning kpBank and kpPQR(again? yes, and it is not the last time) until the drone flies more or less stable upward:

There are three methods to implement here:

To test this, go back to scenario 2 and make sure the drone doesn’t fall. In that scenario, the PID is configured not to act, and the thrust should be mass * CONST_GRAVITY.

Once all the code is implemented, put all the kpYaw,kpPosXY, kpVelXY, kpPosZ and kpVelZ to zero. Take a deep breath, and start tuning from the altitude controller to the yaw controller. It takes time. Here is a video of the scenario when it passes:

This is a fun scenario. Everything is coded and tuned already, right? Ok, we need to add an integral part to the altitude controller to move it from PD to PID controller. What happens to me here is that everything starts not working correctly, and I have to tune everything again, starting from scenario -1. Remember patience is a “virtue”, and to it again. If you cannot and get frustrated talk to your peers, they will be able to give you hints. It is hard but doable:

This is the final non-optional scenario. The drone needs to follow a trajectory. It will show all the errors in your code and also force you to tune some parameters again. Remember there are comments on the controller methods regarding limits that need to be imposed on the system. Here those limits are required in order to pass.

There are a few optional scenarios on this project, but I was exhausted. Too many long hours were tuning parameters and finding bugs. There should be a lot of room for improvement. Here is the video of a multi-drone scenario:

Post submit note The tilt angle limit enforcing was missing on the RollPitchControl. Here is a video with no-crazy drones:

Here is the video.

Provide a Writeup / README that includes all the rubric points and how you addressed each one. You can submit your write-up as markdown or pdf.

This markdown is the write-up.

The altitude control is implemented in /python/controller.py altitude_control method from line 112 to 139 using Python.

The altitude control is implemented in /cpp/src/QuadControl::AltitudeControl method from line 169 to 212 using C++.

Implement calculating the motor commands given commanded thrust and moments in C++.

The calculation implementation for the motor commands is in /cpp/src/QuadControl::GenerateMotorCommands method from line 58 to 93.

Telemetry files are provided on the /python/telemetry directory.

Your C++ controller is successfully able to fly the provided test trajectory and visually passes the inspection of the scenarios leading up to the test trajectory.

Ensure that in each scenario the drone looks stable and performs the required task. Specifically check that the student’s controller is able to handle the non-linearities of scenario 4 (all three drones in the scenario should be able to perform the required task with the same control gains used).

The implementation pass scenarios 1 - 5 on the C++ simulator: