In the last three years, I maintained a FlighAware ADS-B receiver running at home(here is the post where I described it). It is interesting to see the positions of the aircraft around you. Since the beginning, I was thinking in a way to share this application with my friends or to be able to see the planes from another location outside my local network. A couple of months back, I signed up for a Google Cloud account, and I have 400 dollars in credit there. This looked like an opportunity to push that data somewhere and share it on a web site. This post is about how I did it and how you can do it as well. It is not hard. 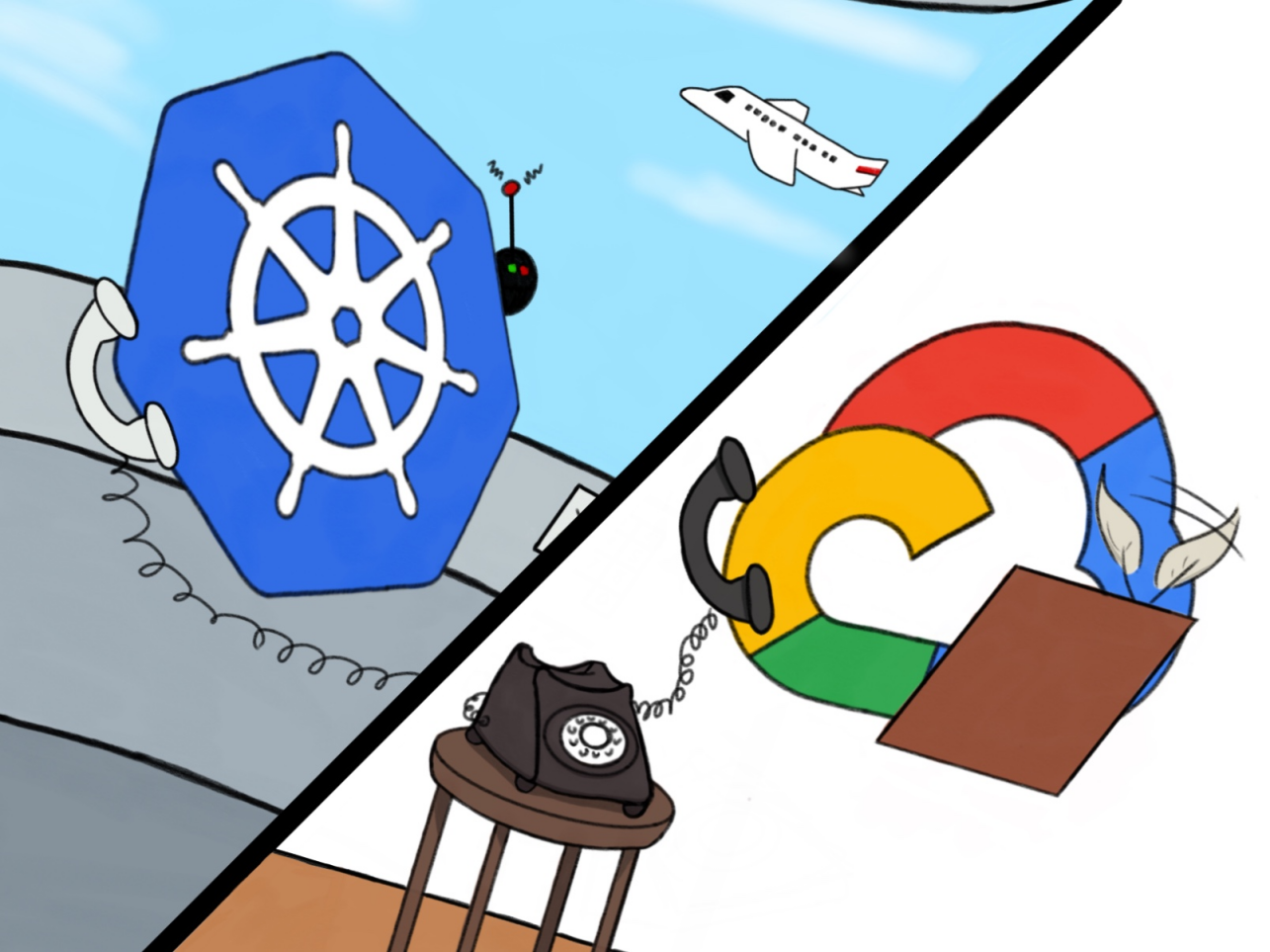 Note: I asked my 14 years old daughter to draw this picture for me after I explained to her what I was doing. It is quite good, and I am proud of her work. They grow so fast. :-D

Here we go! It is a long journey, but I enjoyed every bit. All the code and scripts I used could be found in this repo. Here are the steps I follow:

Those steps will be explained in details of the following sections.

Looking at the local web application and its repo I realized I could use the data/aircraft.json information to get the info out more quickly than consuming the data from port 30005 or 30003.

The second one is could be more interesting because it give you more information about when the data is received, but the UI used on the receiver used the data/aircraft.json. It looks like it is better not to rewrite that UI, but “lift” it to the clouds.

data/aircraft.json was the winner, but where should I store it. First, I thought of sending the data to a GCP PubSub topic, process the data with a GCP Cloud function and store it in Big Query. It was a great idea, and I implemented the collector and the cloud function. It feels great to see the BigQuery table growing with exciting data, but now what? Build a UI? Sure, it will be great, but very time-consuming. Again, the idea was to share the data easily. This was a dead end. Ok, not so dead, but a not-now end. If the web application there was expecting data/aircraft.json why not to store it in a GCP Storage bucket and serve the same data over a Firebase hosting and cloud functions, that would be a more straightforward way to share the data.

The Python script to make a web request to the Raspberry Pi and store the results on a bucket was straightforward. Here is part of it and the rest is here:

These are a couple of scripts that could be interesting to set up the environment:

Great! We have the data on a GCP Storage bucket. Now, we need to make sure it keeps going there.

Even when I could run the script manually, I didn’t want to babysit it, and I didn’t want to increase its complexity by handling failure conditions. The script will fail, if the receiver is not there, or if there is no internet connection. That is ok. It not to restart again over time. There are a few ways to keep the process running, but I have a two-node Kubernetes cluster I could use for that task. Here are the steps needed to have this script running on my local Kubernetes:

First, we need a Docker file:

I know it is pretty to save the key within the image. This key is for the service account created when the collector script was using, and it has no permissions but to upload files to a GCP bucket. In addition to that, we could use a private container registry to ensure that the image doesn’t go anywhere we don’t want it to go. We can create the image with docker build -t ${IMAGE_NAME} .. These are the script I used.

The image is local now, and we can run it locally with:

The script I used is here.

Upload the image to a registry

There are a few container registries available, but I decided to use Google’s Container Registry. To use it, we need to run a few commands:

Configure Kubernetes to use that registry

This step is a bit more complicated. First, we need a GCP service account for Kubernetes to use:

We have the key for that account that we need to put in Kubernetes as secret(also it is good to have a namespace for our project; so we create one):

To understand this process further, the following two links will be useful:

Create a deployment and apply in the cluster

Now the cluster is ready to create pods from our image, and we need to create a deployment. Creating a deployment using environment variables to configure it is tricky, or at least it was not easy for me to find a way how to do it. I end up using this template:

And applying the deployment as follows:

To verify your pod is running:

Congratulations! The collection will be running now, and Kubernetes will bring it back if it crashes. I have this running for a few weeks now. It is working fine only crashing when the Raspberry Pi crashes. I need to restart the Raspberry Pi in those cases, and it is running again in a while. Yes, I don’t have to babysit the collector but the receiver. There is room for improvement in the future to handle this.

The data should be shown on a UI

All good! We see the files growing inside the bucket. It is time to “lift” the web application. I choose to use Firebase as it is almost “free” hosting for a SPA application and nice integration to cloud functions to serve the data from the bucket in a secure fashion. What I did was to create a Firebase project with cloud functions and reverse engineer the dump1090 public_html see how it was calling the APIs. It turns out I have to implement the following end-point:

Knowing what I need to reproduce, I made the following changes to the application to run in on Firebase:

This change looks small, but there is more code here than in the rest of the project. Most of the changes happen in the file public_html/script.js. It is a complex application, and I enjoyed to remember the old days of jQuery for front-end development. There are too many changes to detail each one of them here. The application is on my repo. Please, feel free to try your own or modify this one.

After deployments, we get to the web application that looks like this:

I know… very impressive ;-) but it gets better when you log in:

Finally! It is done. It was a long journey, but this is it.

Let’s recap on the what is going on here: 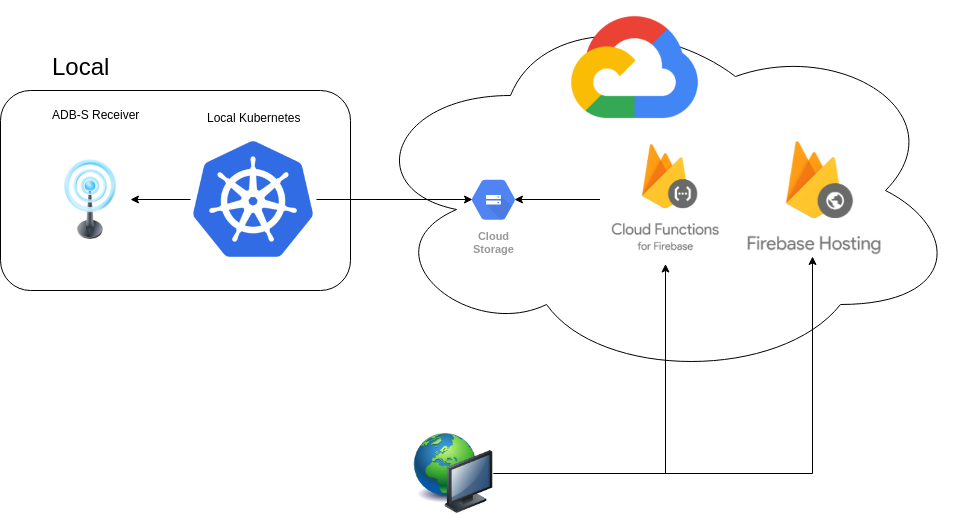 It was a fantastic project. I enjoyed it. I am looking forward to figuring out what else can I do with that data. I think a video showing all the aircraft trajectories in a day could be an exciting next step.