The PX4 Firmware is big, and it is effortless to get lost there. You want to see the drone hovering and get a feel of what is going on without getting distracted by all the code that is in the firmware. You have already had the code to do that on MAVROS Offboard control example. What is needed is to put that code together on a ROS node, and execute PX4 SITL + Gazebo + MAVROS. That could sound like an alien is talking to you, and it is confusing. Let’s walk through that example.

Getting the PX4 Firmware

Let’s suppose you create a git repo, and you are at the root of that repo. The first step is to get the PX4 Firmware. Assuming you don’t want to change the firmware, it could be good to set it up outside your src/ because it is not your source in that case. Git submodules is here for the rescue. You can add the firmware a module:

Even when you don’t want to deal with it, you do need to compile it.

Close gazebo. If you run into any missing libraries or problems, there is extensive documentation on Installing Files and Code. You can also visit another post in this blog for a tutorial on how to do it.

MAVROS will allow you to communicate with the drone or simulator in this case.

Note: If you don’t install the geographic lib dataset you get something like this:

I don’t know how I learn that… So, we need to install it:

Let’s create the src/ directory for our workspace:

Now, we are ready to create the package offb, as suggested by the example. This package will have a couple of dependencies:

Paste the code from https://dev.px4.io/en/ros/mavros_offboard.html there.

In the project offb/CMakeList.txt uncomment the lines:

Compile the package from the workspace root:

It will create the executable in devel/lib/offb/offb_node.

We need a launch file to launch our node (offb) and PX4 + Gazebo + MAVROS. There is a launch file we could see inside the firmware: mav_ros_posix_silt.launch. This launch file has all we need. Let’s include it on ours. Create the launch file for the offb package:

And copy the following there:

Done. Let’s fly! Not yet. What is this px4 package to be found there? The PX4 firmware could be seen a “package” as well, but you need to let ROS know where it is. The information about how to launch it with a ROS Wrapper is here. We can do it with a script. Create a script called launch-common.sh to encapsulate this logic and reuse it:

And copy the following on it:

This will be in the root of the repo, so we can source it any script you want to know about your PX4 submodule. Let’s create a script now to launch our example package:

And copy the following inside it:

Now it is time to fly! Source your workspace and go:

It will take a couple of seconds, but hopefully, Gazebo will start, and you will see the drone hovering like in this video:

Let’s take a look at some graphs. Open a new terminal for rosrun rqt_graph rqt_graph: 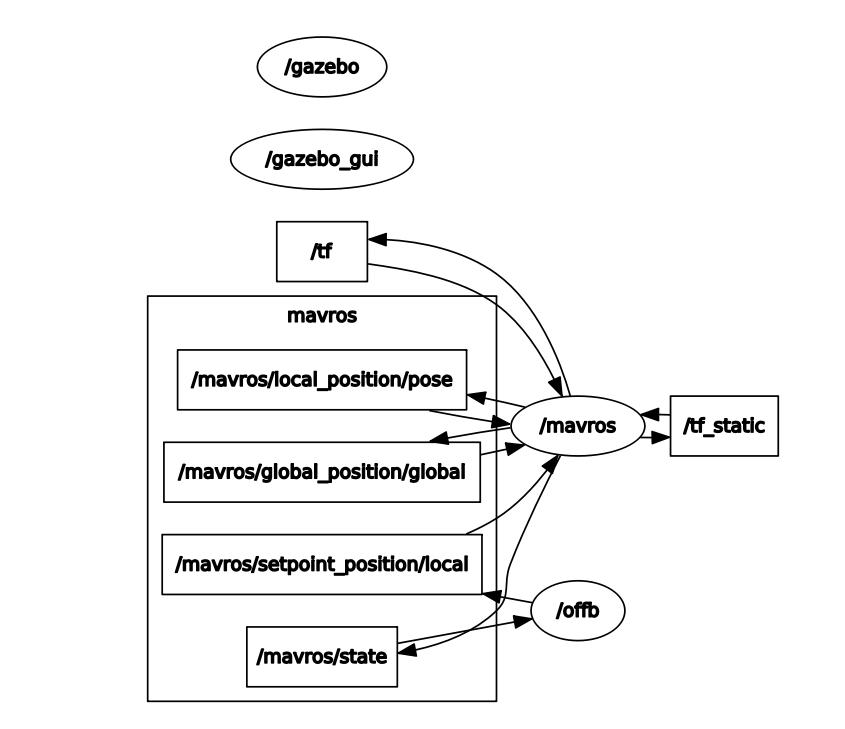 Now you have a project set with a node commanding the drone to hover. There are a couple of things to notice:

All this setup could be found here.